So where to start

I’m Will (Klopp Scala). I’ve been playing Football Manager since CM 99/00, and other management games.

I have played FM online since 05 I’ve played in a number clans from PGC to Cloughies Clan – then in 2009 I decided to joint run a FM Clan Online with a close friend Dave Knight who I met through the world of FM and have spoken almost every week if not every day and that Clan was called The Mag 7 Clan we had a core group of 6-7 regular players.

Fast forward 11 years and we decided to start up a new Clan and call it FM20 Euro Challenge League but sadly due to FM20 being a heap of rubbish Dave decided to venture into Esports Racing.

So full control was passed over to myself and I quickly built a team who help run it with me.

Crrently, we have 13 member that always show up on the game night which is excellent that we have this sort of dedication from this number of human mangers and I’m proud of every one of then for being so dedicated.

Ok now on to the reason of this post…

I have taken control of the might Rangers FC – a team that is very close to my heart and that I’m actually a steward supervisor for in real-life lol.

My manager profile goes by the name of Klopp Scala, so why this name you may ask? Well, other than being a life time Gers fan, I’m also a Dortmund fan. So the “Klopp” is from Jürgen Klopp and the “Scala” from Nevo Scala; the 2 most successful mangers in their history.

So on to the save now…

As I said before, I’m the manager of Gers. I have just completed my first season with them and it’s actually been a bit hit and miss. I will take you through it the best way I can. This season started off very promising, achieving some cracking results in Europe and the league.

But then, I started to falter and drew a lot of the matches, which had frustrated me extremely. Now above and below screenshots, you see where I had struggles and the draws. To be totally honest, it has baffled me as we had been dominant in almost every match with hit possession of 60% – 85% most of the time. And in some matches, we complete over 850 passes.

My first of 4 league defeats was against Celtic. Grrrr!! I don’t really like that team but anyway we lost 2-1; a match we totally dominated. And this was the running theme for the whole season. We would play teams off the park with high possession and high shots in what we should have won but FM being FM messed it all up. One match I had 40 shots, 26 on target and the other team had 3 on target, shockingly they scored 2; that was the Hearts match we drew 2-2 and I was raging.

Now end of the season was interesting. This is where I lost the other 3 league games. Yet again I dominated but still felt we struggled to score. So I decided to change my tactics after the 3-2 lose to Celtic and tried making something similar to Man City when they are in their attacking phase that shifts to a 2-3-5 formation.

This was done by building a 4-3-3 formation, in which I play with 2 Ball Playing Defenders on defence to hold the line and Sweeper Keeper on support to pick up loose balls over the top, Inverted Wing Backs on support to push into the half spaces in midfield and support the Half Back that will drop a bit deeper and push left and right with Tackle Harder on. So it’s a tactical foul hopefully and break down possibly attacks.

We use 2 Mezzalas on attack to push up in to the half space further up in the final 3rd of the pitch and join up with the wingers and so they can run into space and cross into the box or just cut it back.

We use a false 9 on support as he will fall deeper and act as a kind of Attacking Mid and hassle the defence to free up space for the Mezzalas to attack and get into space.

Above is the final position in the table. As you can see, I lost 4 and drew 13. Draws are what tarnished what was actually a really great season as it was all stupid draws that I should have won. Sadly, I couldn’t and that’s very gutting and I’m totally raging. I was so far off Celtic as being a Gers’ man, but at least I got to beat them at some point in the season. Hopefully. I will be more successful next season.

For every dark cloud there’s a silver lining and this was the case for us. Just lost in the quarter finals of the Scottish Cup to Celtic in a game that we heavily dominated but conceded silly goals. Then much of the same in Europe and the league but in the Betfred Cup, we won successfully and that was the first trophy. Hopefully, more silverware to come in the future.

Now, here is an absolute shocker for me and anyone that knows me lol.

I only spent £2m in transfers wow and sold £79m of players. Albeit Morelos was already on way out before I got in. I was not happy with that but managed to off load most the players I wanted to and also got some awesome loan deals in too.

But the cherry on top Esposito 47 games scoring only a small amount of 34 goals. This really shows the tactics i have been using work tremendously well on a good day.

As a whole, the team really did show their class but where unlucky with silly mistakes. Although, as you can see above, the stats tell a story how we actually were extremely dominant throughout the season games without losing. We were miles ahead with 10 and then passing accuracy of 88% and possession of 62%. Also scoring 71 goals.

Finally, the player stats: Miles Svilar with 16 clean sheets. I think it shows defence was actually very solid. In pass completion, he’s joint top with Busquets I got on loan from Barca.

Esposito really was out of this world for me and Miles with Barsic. If it wasn’t for them, we probably wouldn’t have had the season we did. Hopefully, we can retain them for next season but then I have applied for Manchester City as they are now available only time. I will tell until next time. Keep playing always guys and thanks for reading. And also for following us. 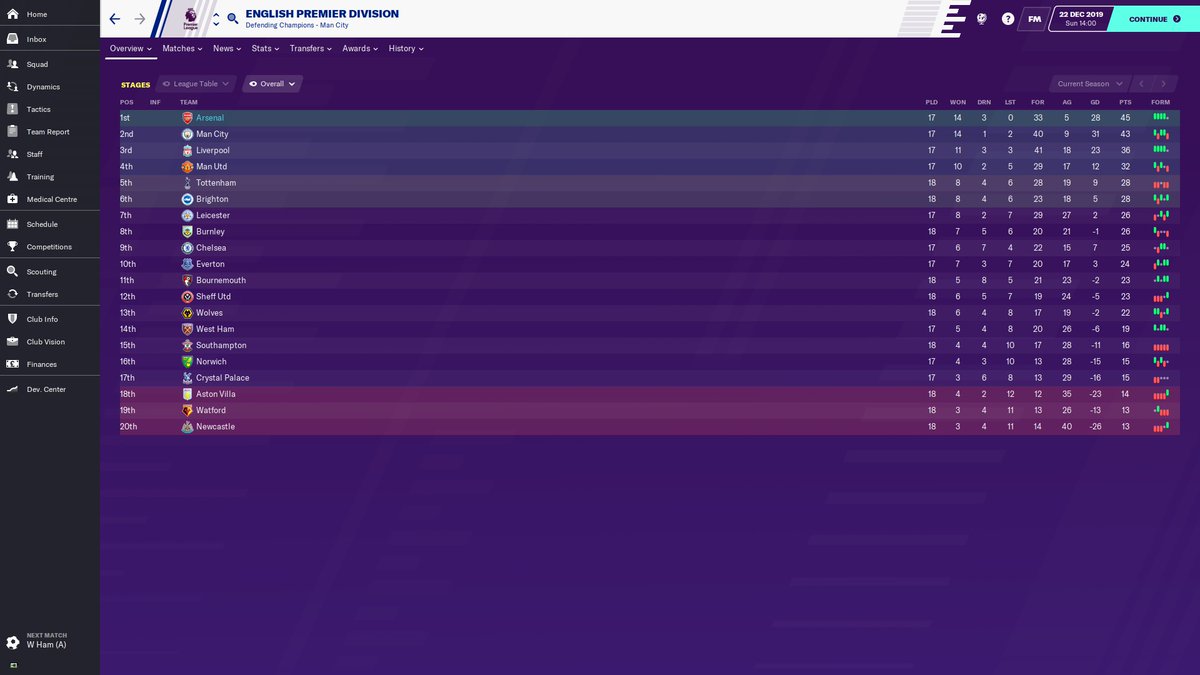 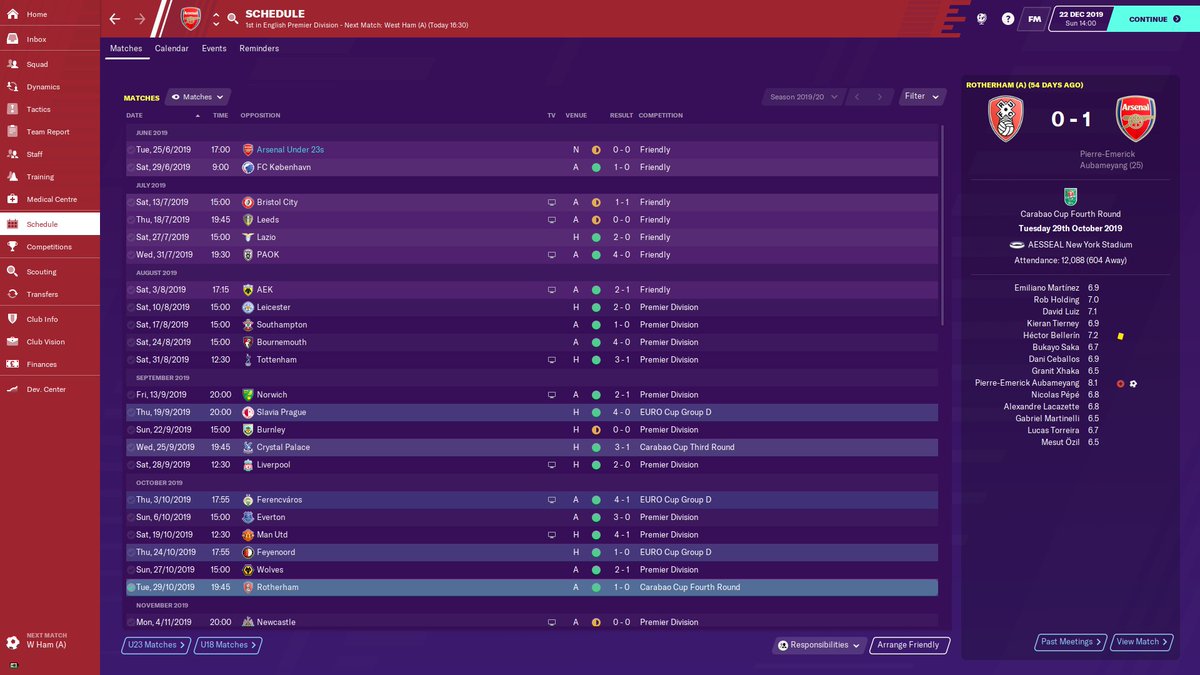 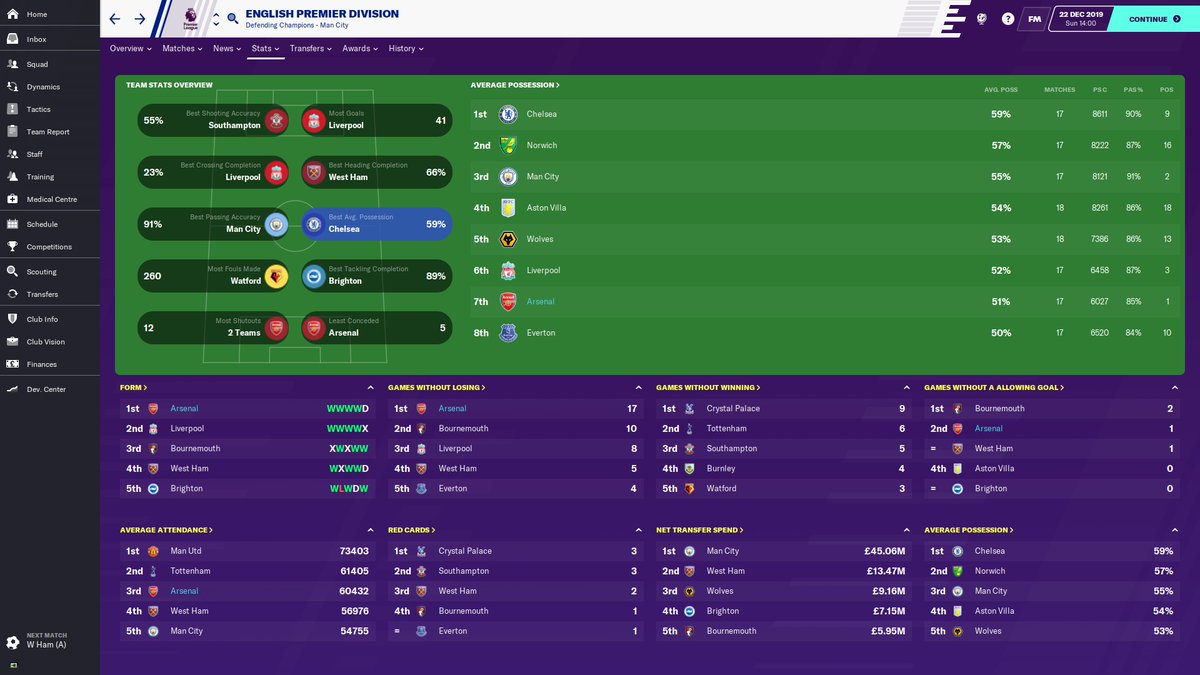 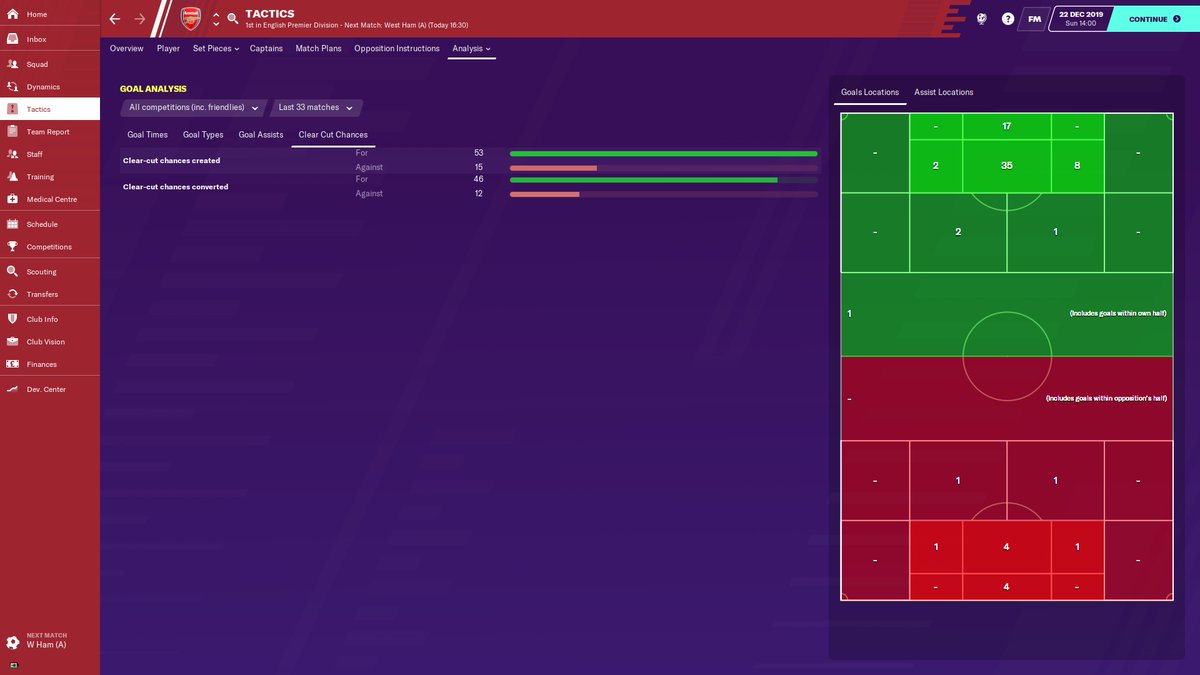 FMtrendGames @fmtrendgames
4 days ago
Revisiting Arteta’s tactics at #Arsenal. We take a look at his current 3-4-3 setup which gave the Gunners major wins post the lock down era. More details coming your way. #FM20tactics https://t.co/dz37nLFKK5
View on Twitter 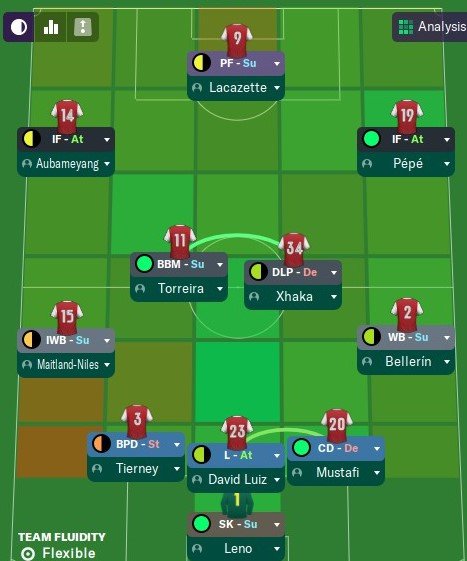