After so many attempts of trying to create an FM19 Route One tactic, which were unsuccessful, am glad to arrive at this one. This tactic met my expectations, which prompt me to share it with you guys here in this post. Talking about its success, I won the Souroti Super League with AS Aris Salonika while using this tactic.

By default, the Route One tactical philosophy is quite different from the one I set up. But the default setup is quite awful, honestly. It is very difficult to keep getting positive results with it, even if you’re using one of the best teams. Because of this, and knowing the tricks in FM19, I made some tweaks.

The overall team fluidity of this tactic is fluid. This influences the entire roles to contribute in both defending and attacking phases. And this is a good thing for an intense tactic like this. However, only the striker, as the target man, stays in front in case of counter attacking possibilities.

Well in terms of switching mentalities, it depends on the team you are using and the opponent you are up against. When using this tactic, I usually use balanced and cautious mentalities.  While playing at home, I go for balanced, mostly. However, while playing away, I use balanced or cautious, depending on the stature of the opponent. I never needed to try out the defensive mentality but you can give it a go if you wish.

In other words, the attacking mentality is not effective with this tactic. I tried it a few times and always get disappointed.

Just doing its normally traditional job. I do not think a sweeper keeper is needed here.

Not much thing to say about the work of this role in this tactic. It has already been covered extensively on this site. The CD role works just the same way here, as it does in other tactics where it is present.

The CWB here is more attacking than the WB. I do not really have a cogent reason for using the combination of the two. However, both roles come in handy in this tactic since both can support forward play when the inside forwards operate in the half space.

This tactic requires aggressiveness and some technical skills. That is why I tried out the DM role here instead of the BWM role. The DM role just suits perfectly for this tactic. I usually play Migjen Basha in this role, and his rating is quite impressive.

Energy is important in the midfield, just like what happens in Klopp’s gegenpress tactic. Therefore, I installed the mezzala role here to bring that vibe and energetic movement in the central area. While the MEZ does his thing, a tireless BBM supports. The BBM shuttling from box to box proves a good cover when it comes to attacking and defending.

Just like what was written in the previous tactical guide, the assigned inside forwards here do the same job. With the support duty, both IFs assist the DL & DR in defending. Moreover, the wide target man role may come in handy when installed in any of these wide positions – but they have to stay narrow and cut inside (just in case you want to use the WTM role).

The TM strength and physical ability in the air is important here since this tactic involves a much more direct passing direction.

I did not bother about the training at all. Your assistant can handle it.

The default FM19 Route One tactic does not use zonal marking. But the trick in FM19 is zonal marking is always better when using counter pressing system.

Feel free to give us a feedback using the comment box below. Enjoy the Game

In reply totg
60 minutes ago
@tomasz_grzelak1 Not that good. Harry Kane scored just 9 goals in 23 matches
View on Twitter
0
0 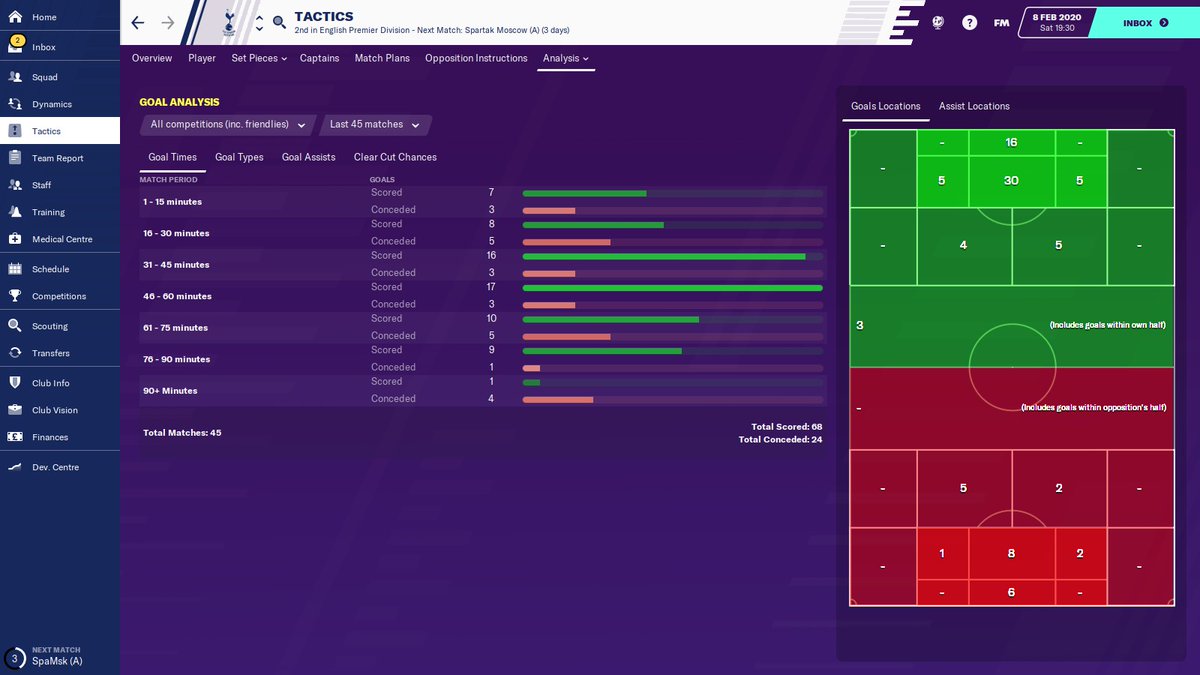