This FM18 Atlético team guide provides all you need to know about Club Atlético de Madrid. If you’re having a thought of managing this club in Football Manager 2018, this article gives you an insight about the club. The information you find here may help you decide whether to launch a new career with this team.

The club’s history, finance, board expectations, team report. Squad, youth academy, staff, and dynamics is shared in this write-up.

Atlético de Madrid, also known as Los Rojiblancos, is a Spanish professional football club in Madrid, Spain. The club was found in 1903 by three Basque students in Madrid. However, from its time of creation, Athletic Madrid (its first name) were a youth branch of Athletic Bilbao until 1921. As a step to becoming an independent club, they moved to Estadio Metropolitano de Madrid, a 35,800-seater stadium at University City of Madrid. They currently play their home games at Wanda Metropolitano.

In terms of success, Atlético Madrid is the third most successful club in Spain. Their golden era came between 1966 and 1977; the team won 4 La Liga titles and 3 Spanish Cups (Copa del Rey). In all. they have accumulated 10 La Liga titles, 10 Spanish Cups, 2 UEFA Europa league trophies, 2 UEFA Super Cups, and 1 La Liga 1|2|3. However, Atlético have been the best team that seriously keeps challenging both Barcelona and Real Madrid in the Primera Divisiόn nowadays.

The overall status of this club’s finance is Rich. They are seen as a rich club in FM18, which means they can sign high-profile players. In the game’s starting season, Atlético are under a transfer ban. Therefore, you won’t be able to make any offer until 5th September, 2017. This may positively affect the finance for this period, since there won’t be any transfer expenditures.

Los Rojiblancos have indulged in a couple of loan acquisitions over the past few years. The club owes a total of £383M as a result of loans. A sum of £245M was loaned from the bank in 2007. But a debt of £138M remains, with an expectation to complete this debt in 2030. In addition, the club owes £138M as a result of state loan but the board anticipates to finish this payment in 2020.

Last season, Atlético Madrid made a profit of £29,254,046 in La Liga. However, the overall balance when you start this career save is approximately £8.8M, with a loss of £467 (spent on scouting) in the first month of the game.

The FFP regulations allow the club to make no more than a loss of £4.45M after 36 months. The same rule goes for Torino FC. But, the board project the club to make a profit of £13.32M over this period. This proves that this club will pass these regulations. And the chances of this club heading to bankruptcy is extremely low. But still,  you have to apply some good management skill.

The board left an initial transfer budget of £175, 872, which is 90% of the club’s revenue. The wage budget is £2.209M while the club is already spending £2.217M on player-wage. Well obviously, the transfer budget is very poor, but that’s because the club is on a transfer ban. They violated FIFA rule about signing under 18 players. The full detail is found here.

As a result of this ban, you’ve to use what you have until January. But I don’t think you have anything to worry about. Atlético already have sound quality squad that will enable you challenge for every trophy in each competition if you do things right.

Like most of the clubs I have reviewed, the scouting budget of this club is also £720K. And there are no restrictions in place for scouting. The scouting team can scout any region you want.

Again, because of the transfer situation at the club, the board limited their season expectations. So the luxury of choosing a suitable level to reach isn’t available. You must reach their limited level in each competition. Otherwise, your career hits the rock.

The board expect you to reach the quarter-final of the UEFA Champions League. And also, lead the team to Champions League qualification; you have to finish at least 4th in La Liga. The Copa del Rey competition is not important.

In the screenshot above, the “All Positions” comparison is drafted, excluding the goalkeeper position. As you can see, the team ranks very high in most of the positions. They have quality strength, work rate, and teamwork. Also, their passing, decisions, and first touch are above average in the league. From these ranks, I define Atletico as a robust team with the capacity of handling any tactical style you impose. They can do well with tiki-taka style, physical play, park-the-bus style etc.

Coming to the defence section, as you can see above, the bars are high. The team has the best defensive abilities in La Liga. You don’t need to add any defender in the team; unless you want to bring in young defenders for future use since players like Diego Godin, Juanfran, and Filipe Luís are aging.

The midfield section is very good too. Though, it’s a bit good in passing, vision, and technique. But it’s still capable of challenging any team. However, you may still need to improve this area in winter transfer window.

Atlético have a dangerous attacking force when you look at the comparison report. Their key weapon is the off-the-ball skill. They can drive any opposition defence out of shape and occupy a dangerous position. Overall, the team is really good in air; you can take advantage of that during set pieces. Moreover, good anticipation is really important for attackers and the team’s attackers have that.

Atlético de Madrid have a variety of intelligent, creative, technical, and physical players in the first team. The total number of active first team players is 19 (excluding Diego Costa; he won’t play until January). And the squad average age is 27.80. Nevertheless, you can win a Treble with this squad if you manage them properly. The screenshots below display the first team squad.

Players on loan and future transfers

Notable key players that can help the team achieve a lot are below. Use them to your advantage.

This club has a great youth facility, with a well-established youth recruitment. But unfortunately, in my opinion, I don’t see any player in the under 19s team who’s ready for first team. They lack the abilities. However, I would partially recommend Sergi and Nicolás Schiappacasse for first team play; both are in the B team.

From the staff overview screenshot above, the coaching staff of the club is one the best in La Liga. They have a superb goalkeeping coach. The coaching team comprises of 10 members with only one vacancy left. You can only sign one coaching staff.

The scouting team is also good with 10 members present. But you can increase it to 12 or 20 members. Finally, the medical team, which has 7 members, ranks 2nd in the league. Only two vacancies are left for new members. However, I don’t think any of these staff teams need improvement. They are all good.

FMtrendGames Retweeted · Miles Jacobson @milesSI
18 hours ago
A simple but effective tidy up.

When you negotiate new contracts with multiple staff members at once, you'll now receive just one news item that merges all of the information in one handy place #FM21Features https://t.co/9J2TBZPhnR
View on Twitter 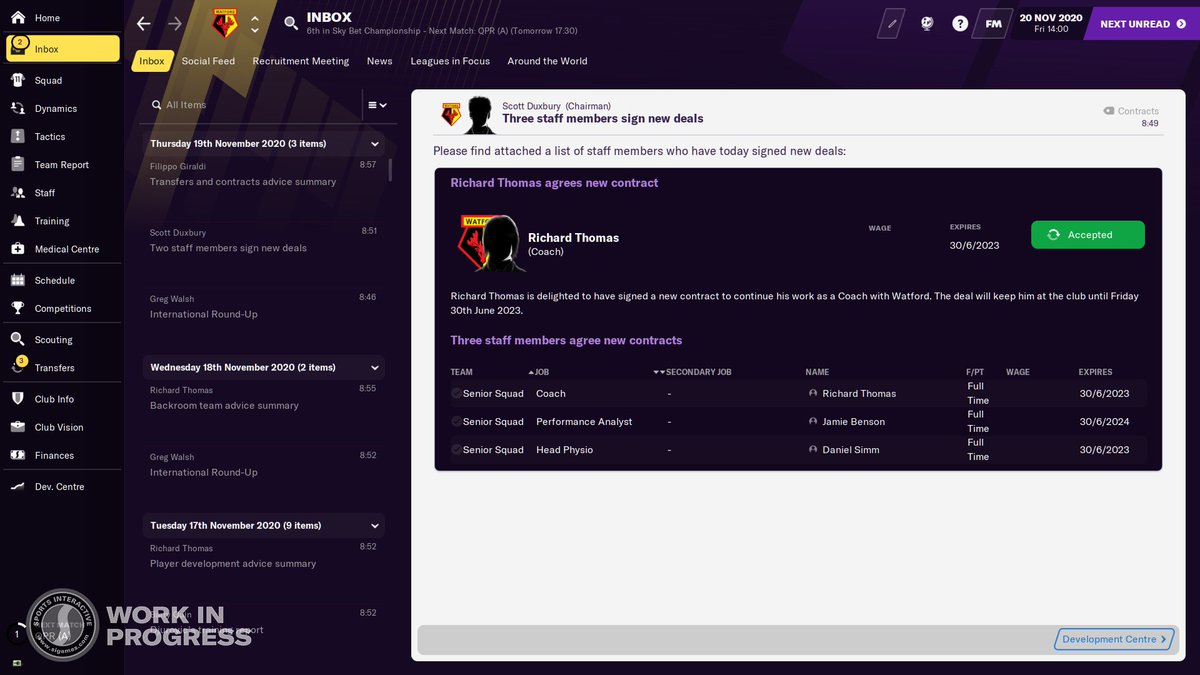 FMtrendGames Retweeted · Miles Jacobson @milesSI
2 days ago
You've had a couple of manager models so, what about Newgens?

Because I'm feeling generous, here you are... #FM21Features https://t.co/mcVMjK9DpB
View on Twitter
118
0

FMtrendGames Retweeted · Miles Jacobson @milesSI
2 days ago
A couple of weeks ago I had a nice chat with @KFC_UKI who complained that there weren't white hair options or bolo ties... #FM21 introduces way more hair options- more info on that in a later blog.

Still missing the bolo ties though, sorry! Thanks Danny for photoshoping one in 🤣 https://t.co/6ylJl3bH5n
View on Twitter 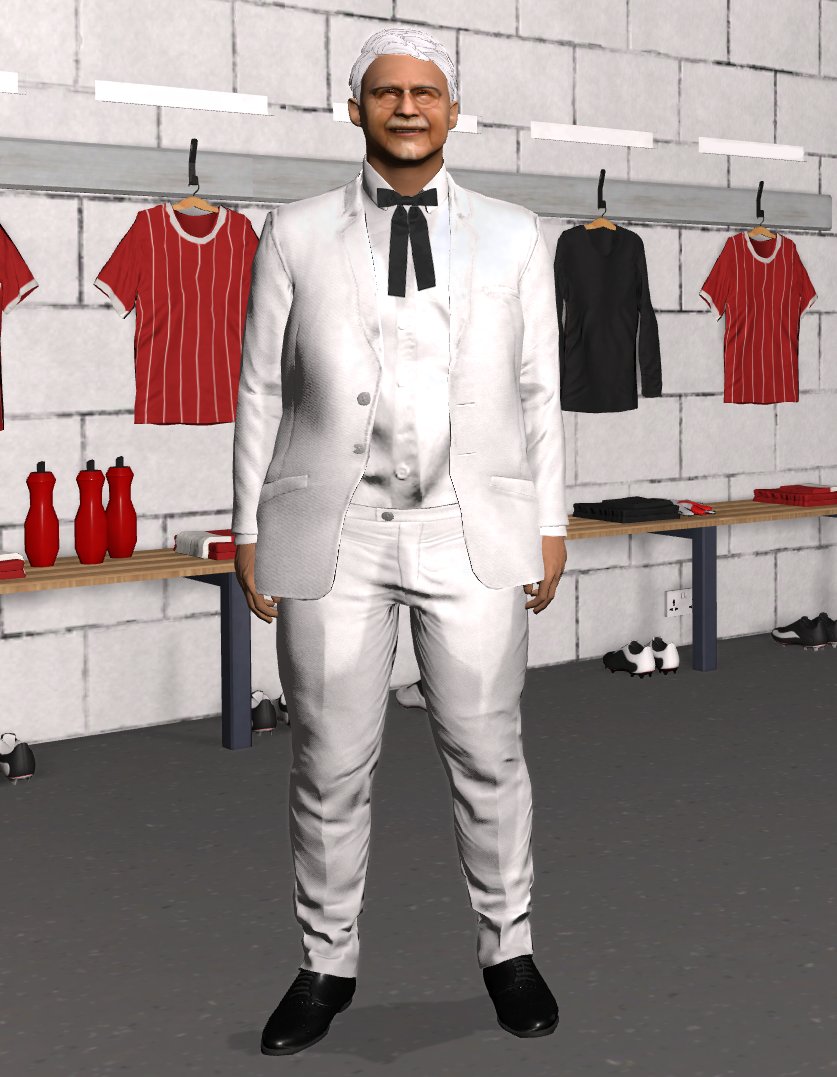 FMtrendGames @fmtrendgames
2 days ago
Part of the graphic part of the FM21 manager profile. What do you think? https://t.co/VfsSCvxeAk
View on Twitter

Miles Jacobson @milesSI
Some of you have already noticed my new profile picture...

I'm REALLY happy with the work the team have done in this area this year, so I get the honour of showing some more throughout the day!

In reply toRichard Timm
2 days ago
@RichafaFIFAHD96 @FootballManager Sure. Any particular feature you're confused about there?
View on Twitter
0
0

Before entering a shootout you'll now be able to see your player's body language, allowing you to get into the mind's of your potential takers before selecting that all-important order #FM21Features https://t.co/GXQzRlIumt
View on Twitter 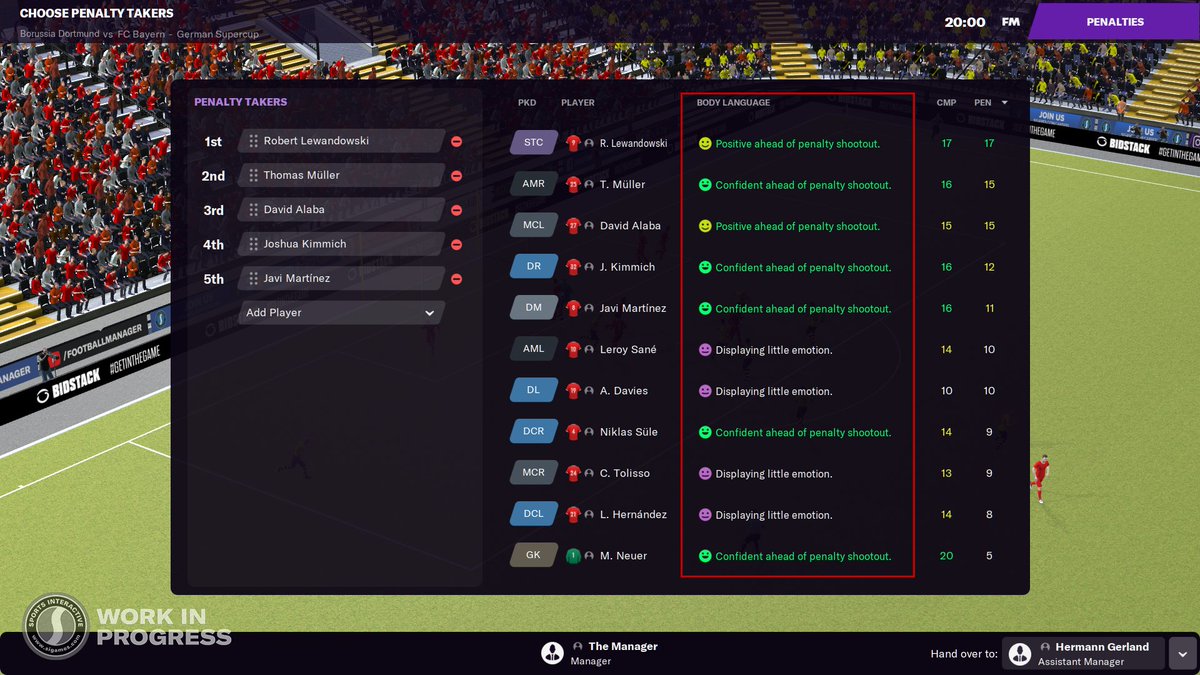